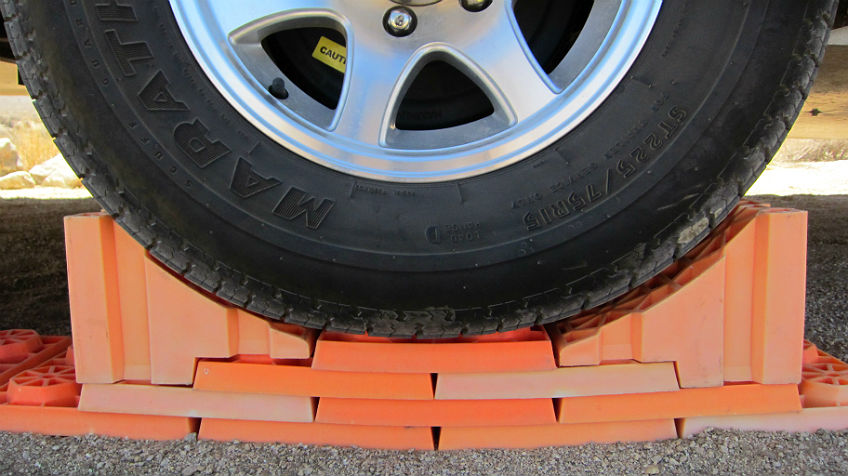 Tips for Leveling Your Trailer

I’ve been mentioning getting level a lot lately, and since we’ve established a pretty good system for leveling the trailer, I thought I’d share it.

The first thing we do when arriving at a campsite is determine if we are level from side to side. (I do a little motion with my hands that most people would interpret the meaning to be “so so” but between me and Brian, it means “side to side”). I’m usually outside of the trailer when Brian backs into a spot. When he’s in place, I give my side to side signal with my hand and then go inside to see if we’re level.

I know a lot of people use the level on their hitch to see if they need to add blocks, but we like to put the level inside right next to the refrigerator.

We were aware that being level is important for extending the life of the fridge, but I don’t think we realized how important it is until we had our wheel assembly replaced. The RV repair guy wanted to make sure we were level even when he was replacing our assembly; he said he’s had to fix too many refrigerators because they sat un-level for too long.

I used to use this bubble level

, but recently we’ve started using an app on the ipad called: Clinometer ($0.99).

The awesome thing about the Clinometer is that it gives you a digital read-out. If it shows 1.0, then we need 1 block, 2.0 = 2 blocks etc. If you’re parking on dirt, your blocks might sink in a little. So, when we arrived here, the Clinometer said we were 3.5 off, so we did 4 blocks and sunk down a little and are sitting perfect. (pictured above)

This level is also nice for when we’re leveling front to back. In the past with the old bubble level I would shout “more” or “a lot more” to Brian while he would lower or raise the jack. Now I tell him the number and he has a much better idea of how far up or down he needs to go.

The first screenshot, where it’s perfect is with the ipad sitting the long way, front of the trailer to back. Brian showed me today that if we turn the ipad where the length of it points to the tires the level is bit off. So, next time I’ll turn the ipad depending on the direction we’re leveling. Though in our current spot, it wouldn’t have made a difference, and extra block would have thrown us off by .6, but still good to know.

Overall, it makes the process a lot easier and much more scientific.

Dinner Last Night:
Cauliflower Crust Pizza. I thought the crust was a little soggy. After I put the cauliflower in the food processor, I noticed that it was pretty moist. Next time, I’m going to soak up some of that water with a paper towel, it’s definitely worth another shot.