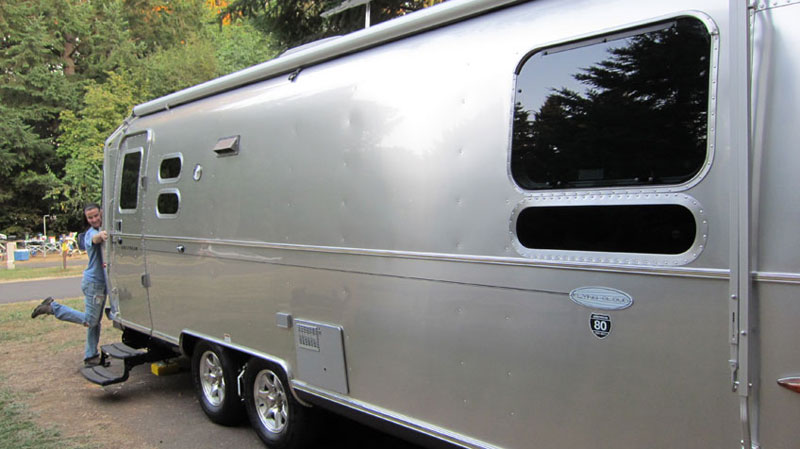 It’s 6am Sunday September 4th. I’m wide awake. What’s new? Well a lot! Yesterday we took delivery of our 2012 27ft Airstream Flying Cloud. I can’t believe the day finally came. We ordered it on May 6 and it took 4 months to arrive.

We met our sales guy at the dealership at 9am. He took us across the street to see the trailer. When we got there, it wasn’t in view and he was being chatty about his truck. After awhile I actually stomp my foot and demand he show us the trailer. So we go around the corner and there it is, but then he can’t find the keys. So we wait some more. The keys arrive a few minutes later (feels like forever) and we finally see inside. The leather is the right color. The pull-down blinds are awesome. It’s chilly so we turn the furnace on and it’s so cozy. It’s perfect.

We then show a service guys where we want the TV hung in the bedroom and where to install some hooks for towels. Then we go back across the street to do the paperwork.

We do a little more waiting, but the paperwork was easy. Just a few signatures and we’re back with the Airstream getting our official walk-thru where we learn how it this modern trailer works. I took a few videos because I read on Airforums that we’d be referring back to them frequently. It was all pretty straight-forward. The funny thing really, was everything that we had in the old 1963 Flying Cloud, is just a lot easier in the 2012. (For those just joining us, we restored our 1963 in 2005, so it was relatively modern on the inside.) For example, in our old FC we had this insane Xantrex inverter that had a pretty complicated computer. In our new trailer it’s just a button that we push when we want to use the inverter.

**For my non-trailering friends, we need an inverter when we aren’t plugged in somewhere and want to plug in computers or the TV and run them from the batteries.

Another awesomely easier thing is the refrigerator. In the old trailer if we were towing, I would set it to battery. If we were boon-docking I would set it to propane with an old-timey spark button, and when we were plugged in I would manually set it to use electric. The new flashy 2012 Airstream has the fridge on AUTO and I don’t ever have to do anything. It SENSES if we are plugged in, then if it doesn’t find power it goes to the battery, if it doesn’t find power there it goes to the propane. !!!

More on the features later. So we break for lunch and return to hitch up and pick up a few items in the dealership store with our $50 gift certificate, then off we go.

We left the Prius at our friends Kier and David’s house because we’ll be returning there in a week. So I’m in the passenger seat, Curtie’s in his crate and Bri of course is driving. 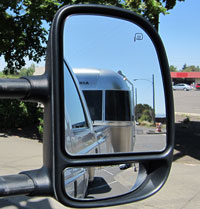 I was kind of surprised that I hadn’t been emotional. Every time we’ve pulled up to an Airstream dealer I’ve had tears in my eyes. Even the first time I ever went to one back in January 2005. So I was expecting tears when we arrived on the lot or when we saw the trailer, but there were none!

So we drive away from Sutton RV and we’re going down the road. When I looked in the my passenger side mirror and saw the trailer behind us the tear ducts finally opened (I’m misty again just writing about it). The trailer in the mirror brought back all of the memories from last time. I am really really so happy.

We drive about 15 minutes to Armitage Park. It turns out our camping reservation is at Richardson Park, fortunately that is only 20 minutes away but the phone battery is dying (and we left the car charger in the Prius) so I quickly jot down the directions from the GPS. We find the park fine and Brian does a professional job backing us into our spot. We casually start the steps to setting up, though we aren’t going through a regular routine yet. 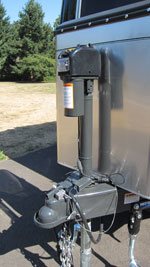 Brian starts messing with the motorized tongue jack, and I guess I’m just watching in awe because we used to do this by hand. I got our level out, even though there is a level on the jack. Then suddenly something very scarey happens. We are level (front to back), but we didn’t put any chocks behind or between the wheels so the trailer starts to roll. I yell for Brian to raise it back up and it stops moving but we’re pretty freaked out. I run to the truck for our chocks, the kind that go between the tires. We don’t have any experience with these since our last trailer was a single axle so I’m trying as fast as I can to ratchet them open but can’t get them to do anything. Brian takes it from me and gets it to work and we secure the trailer.

After we are able to relax again, we realize that we didn’t level the trailer side to side, only front to back. Oh yeah, we remember, that was the first thing we would do when we arrived somewhere was side level side to side while we are still hitched. Well fortunately it was near perfect so we didn’t have to deal with hitching up again.

We spent the rest of the afternoon unpacking, and around 6pm drove back into town to get some groceries. I didn’t feel like cooking so we decided to have what we call a “Judy Dinner” which is basically cheese, crackers, fruit, nuts, olives, pita and hummus. When we got back to the trailer we cracked open a really nice bottle of Betz wine that our friends Pat and Rich gave us for our first night in the trailer.

There’s not much else to tell. We unpacked some more. We set the dinette up like a L-shaped sofa and watched TV in the living area, because we couldn’t figure out how to get the DVD to play in the bedroom.

We slept comfortably our first night. I was hoping to sleep in a bit more, but I’m still too excited I guess.