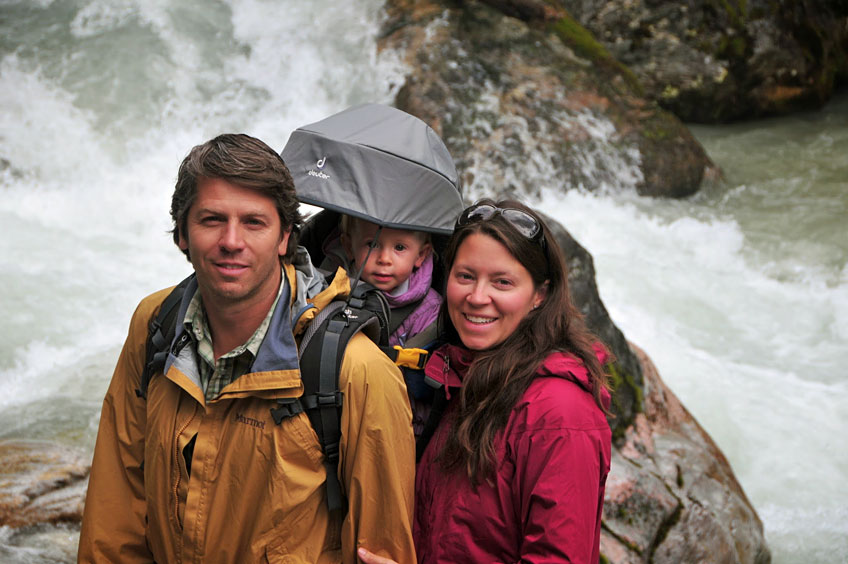 Advodna means Adventures of Dave and Ann. I think I finally started pronouncing it right this last week. Ad-vo-D-N-A.

Dave and Ann have camped in 10 countries and love life on the road. We sat down with them to learn more about their trip south of the border and to find out why they’d prefer to be in a trailer than a big house with a toddler and an infant.

Leigh: Can you tell us about your first big adventure? Which was your honeymoon, right?

Dave: San Francisco. I feel like you hear this story a lot now, so it sounds like it’s getting repetitive. We were getting older, wondering if we should have kids, if we should get married settle into something. Just about that time, we started hearing stories about young couples who matched our description going on fun grand adventures. Whether it was the Bumfuzzle’s who bought a boat and taught themselves how to sail and sailed around the world and then had other adventures, or our friends Luis and Lacey (who became our friends later) from Lost World Expedition driving their land cruiser to South America. We realized there was another option. The same way we look at Airstream blogs now, we looked at these Overlander blogs of couples heading south and pretty soon we started testing the idea out on each other, thinking we would never do that right?

Ann: It slowly became we could do that, we could totally do that.

Brian: This was what year?

Dave: Then we bought an SUV and thought if we were to do it we would do it in this. Then we bought a rooftop tent, if we were going to do it we would probably want a rooftop tent. Then the big snowball happened. Before we knew it, we were on the same page and decided we were going to be a team and then we decided to get married. We got married in October and left in November and drove south. 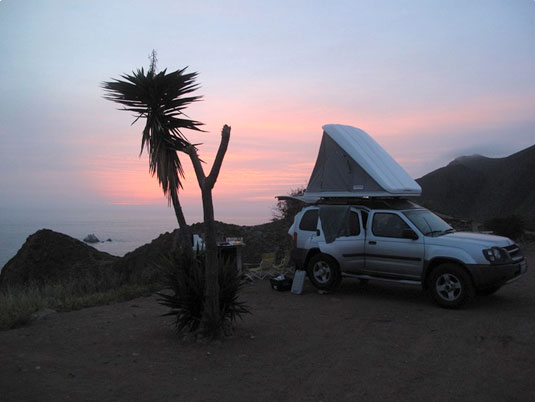 Ann: Through Mexico for 2 months.

Dave: I think the most surprising thing was all the way down through Mexico… We had packed extra batteries, extra oil filters etc, before we crossed this huge intimidating border and then we proceeded to stop at Walmart every three days to get something we had forgotten.

Dave: There’s every convenience you want. We got our brakes changed at this beautiful brand new Pirelli dealership.

Leigh: So 2 months in Mexico…

Ann: It was 2 months in Mexico, then we went to Belize for…I don’t remember the timing for the rest of it.

Dave: At that point it’s just a couple weeks in each country.

Leigh: And then you flew out and shipped out of Panama?

Leigh: Would you do it again?

Ann: We would do some shorter version into Mexico probably.

Ann: We’re glad we did it unattached without children. There’s some anxiety involved that I wouldn’t want to add to it.

Dave: It’s really about the anxiety, it’s not to say that anything’s going to happen. We know a lot of people who are on the road and have done the trip and nothing’s ever happened. We had our little minor scrapes, but it’s no different than what could happen in San Francisco. But there was anxiety.

Brian: Would you take your Airstream into Mexico?

Dave: …the lifestyle. Generally speaking a more simple lifestyle that’s down there.

Ann: A truck camper would be good.

Dave: And now that we’re changing our mode of transportation to something like an Airstream that’s so much more comfortable for us, for family and realizing on our first Airstream trips, we were posting pictures from the US that our traveling friends from Central America and South America were liking with big exclamation points saying “Oh my god that’s the most beautiful thing I’ve seen,” whereas at the same time they’re looking at tropical waterfalls and have monkeys on the roofs of their cars. It’s reinforcing that we live in a pretty amazing place and that there’s plenty of exploring to do around here. That’s not to say people shouldn’t go and have the south of the border experience, now it’s just obvious for us, after going to Canada with you guys there’s just so much to see in North America.

Brian: So what’s the next big adventure for you guys?

Ann: We’re going to have a baby in July.

Leigh: Speaking of babies, can you talk about your renovation and why you’re doing it?

Dave: We feel a little silly calling it a renovation since it’s a later model trailer. It’s a 2005. We saw it after the 8 week trip up to Banff.

Leigh: For those who don’t know you, you were in a smaller trailer.

Dave: We were in a 19 foot Flying Cloud, we were the smallest trailer on the caravan and received much flack for that.

Dave: We got to show off parallel parking. At the end of that trip, we had such a great time, we were comfortable and happy on the road. We knew we wanted to do more of it and we were thinking of having a second child somewhere down the road and that a larger trailer was in our future for the amount of travel that we wanted…

Ann: For the amount of time we wanted to spend in it.

Dave: So on the tail end of that trip we got on Craigslist. We had many nights pouring over layouts literally doing photoshop mashups of different designs to see what possible animal would fit our lifestyle when we stumbled upon this 25 foot CCD 2005 model that they also call a “six sleeper” an SS. That has a dinette on the side and an L shaped couch. It’s a great family design, we think.

Leigh: What’s the reason for your renovation?

Ann: It’s just a little too sterile and modern for us. And in our last Airstream, the foam was already smooshing down. So that was going to change.

Dave: We were going to spend a fair amount of time in it and we want it to be homey.

Brian: Can you tell us what you’ve done?

Dave: We started by adding solar. 400 watts on the roof and in the process of doing that, to get the wiring in, we took out the front couch and took out the dinette just to do wiring. Took out the fridge…in doing that we realized there were other things we wanted fixed. We got the couches reupholstered. We got the cushions redone in a nice non-two-toned fabric like the stock one. We got our dinette refinished and then we looked at the kitchen which was just an inefficient design. Opening cabinets into open drawers. Pretty soon we decided to gut the cabinet boxes of the kitchen and then face them all with nice wood.

Ann: We lost some storage, but gained some counter space.

Leigh: One thing you said the other night was a lightbulb for me. As a couple with no children, we look at you guys and other people we know with children in Airstreams and wonder how are you not going crazy in your trailer? So the other day you were talking about managing the household and all that. Can you talk about that vs. the trailer? 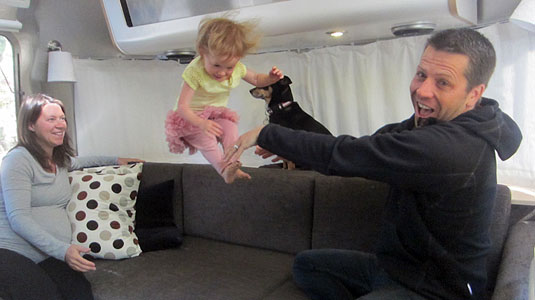 Ann: We find that being home, it may also just be our personalities liking to be out and about doing things. Having Wynne out and about and doing things is way easier than trying to keep her home and get her in weird routines at home that don’t satisfy…

Dave: On top of it when you’re dealing with the maintenance of a larger house and the stuff that goes into a larger house and inevitably the things you decide you want to buy to fill that and maintain, that with the load on top of trying to manage a toddler it gets overwhelming.

Ann: Even going out and doing a chore with her is way more manageable than trying to get her to do a game here.

Dave: When we’re on the road, every new campground, you open the door and it’s a –

Ann: It’s a new playground, it’s a new national park. It’s exploring we’re excited to do, so she gets excited.

Leigh: And the trailer is easier to manage.

Ann: Yes! Exactly. The trailer is easier to manage.

Dave: And thinking about the prospect of having a second baby in the trailer starting sometime soon after July, we know that there’s going to be some sleepless nights and we know there will be crying and some stressful times. We can either be home snipping at each other and mad about the fact that we’re trapped by this little beast that we’ve created or we could be out in the world at least doing 95% of what we want to do even if sometimes we’re a little bit tired. At least when we wake up it’s a beautiful sunrise and we’re somewhere awesome. 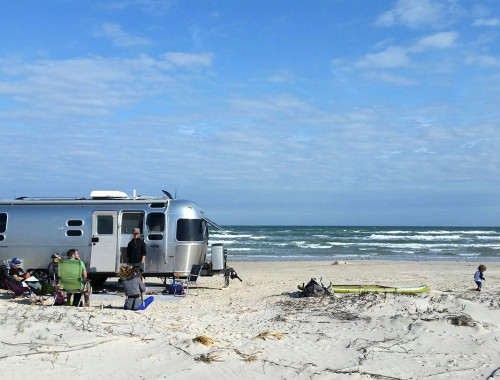 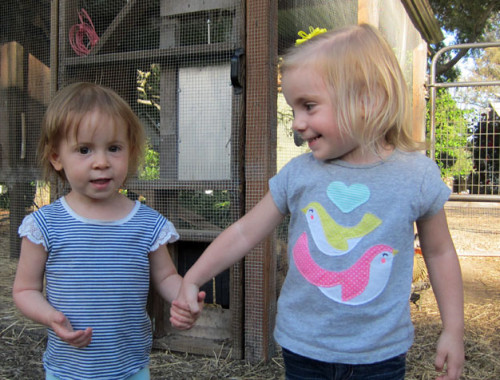 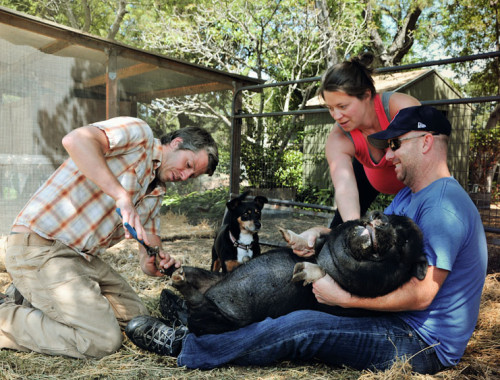