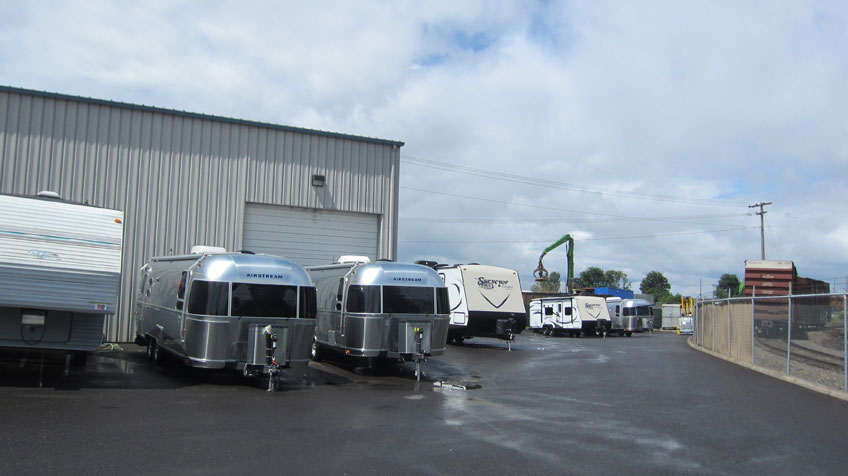 This morning we brought our Airstream to the Service Department at George Sutton RV in Eugene, OR. We didn’t have anything major on our list, we just figured since we’re in the neighborhood we should get the little things taken care of.

There are things we could do ourselves like tire pressure and wash, but sometimes it’s definitely more convenient to get it all done at once by someone else.

– INSPECT TONGUE JACK OPERATION AND LUBE AS NEEDED
Our jack has been making some funky sounds lately so we wanted to have them give it a look.

Correction: Inspected jack and found it to be working good. Pulled bubble level and sprayed with tri-flow. $25

– REPLACE BREAK AWAY CABLE WITH COIL TYPE
Correction: Removed old break-away cable and got new coiled cable installed. Put old cable in unit for the customer to have an extra. $12.50

– RE-SECURE REAR R/S STAB JACK
Cause: Old bolt that held jack up was striped out.
Correction: Had to drill out rear hole on jack to get new bigger screw through. Re-secured jack to unit. $75

– SET SCREW FOR WINDOW KNOB
Correction: Had no set screw to put in. $0

– FAN OVER BED IN NEED OF POWER
Cause: Found that the plunger that stops the fan when lid is closed was rusted down not allowing the fan to turn on. Also found that the rain sensor had some rust on it making the sensor think it was raining and only letting it close.

Correction: Checked all of the connections in the unit to make sure power was getting there, everything was good. Manually ran vent up and down few times and got the fan to turn on, but every time knob was locked on it would only close the lid. Got up on roof and found the plunger was rusty and the rain sensor was dirty. Cleaned out the top side of vent and vent lid. Sprayed plunger with some tri-flow and cleaned off the sensor really good. Went back in the unit and tested a few times and everything was working good. $62.50