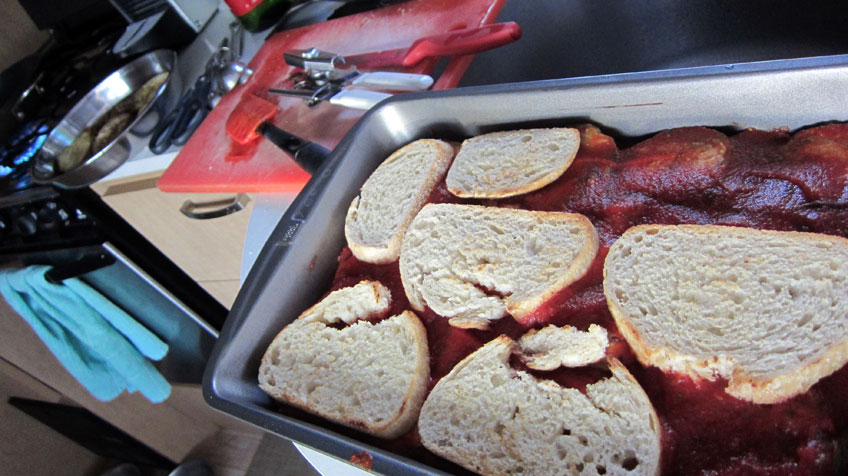 Yesterday when I was researching RV parking in Los Angeles, I stumbled across a few articles that referred to people who live in their RV’s full time on the street as “homeless”:

“Foster, one of roughly 1,200 valley RV dwellers counted last year, said he doesn’t consider himself homeless, because he has shelter. Many other vehicle dwellers feel the same.”
– LA Times

“There’s controversy over “urban camping”: people living in their motor homes on residential streets. Many say they have no choice because they’re homeless. ”
– K-ABC News

“In the neatly kept RV he calls his “monk’s cell,” Grant argues that more local governments should allow single people to live this way.”
– LA Times

While I was trying out a new recipe, (Rustic Bread & Eggplant Lasagna) I couldn’t stop thinking about the perception people have of full-time rv’ers. Of course some people may truly be homeless because their RV is the only option they have. Then there are weirdos like us who choose it as a lifestyle.

If I was a home-owner I wouldn’t want an RVer living on the street out front of my house, but from what I’ve seen, most urban RV dwellers stay away from residential neighborhoods and either flock together or try really hard to be inconspicuous.

Anyway. The Eggplant Lasagna was just so so. It’s a vegan recipe (and we’re not vegan). We really missed the cheese.