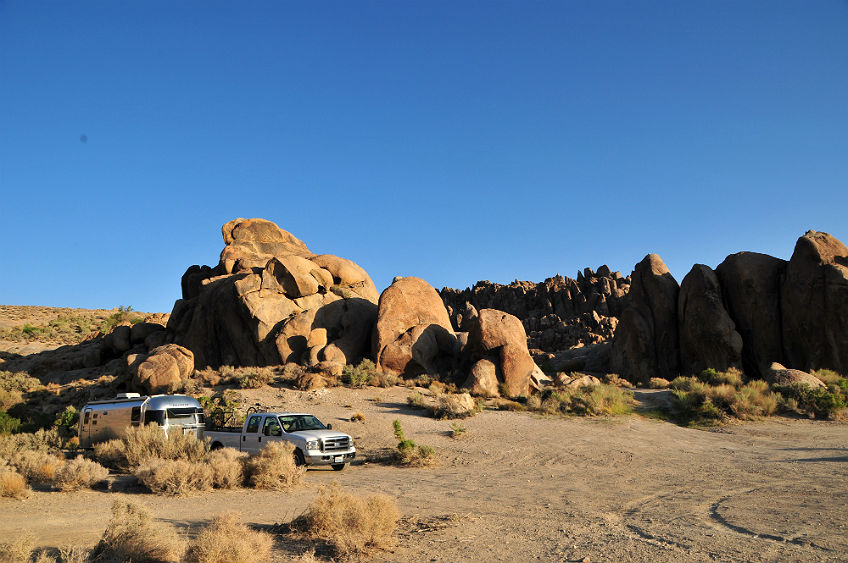 On Saturday we drove north east approximately 3 hours from Burbank to Lone Pine, California. We were planning on boondocking in the Alabama Hills. The Alabama Hills have served as a location for over 400 movies. Most recently Star Trek Generations, Gladiator, Iron Man, and Django Unchained.

The area is incredible, unfortunately cell service is worse than expected. We got 1 bar of Verizon at the beginning of Movie Road, and then it dropped to extended. Our other phone showed up to 3 bars of AT&T 4G, but when you tried to load a web page nothing would happen.

Determined to make it work, we unhitched and went scouting for a site. Back on the main road leading to Movie Road (Whitney Portal) we found other access roads to the BLM land. They were closer to town and it looked like we had 3 bars of Verizon and 2 of AT&T.

We went back for the trailer and towed over to our new location, but then we couldn’t get level. 4 blocks on one side seemed close enough, but then we had to raise the trailer so high in the front it seemed a little precarious. So we hitched back up and moved it forward a little and tried again. No luck.

There was another spot nearby that didn’t have AT&T but still seemed to get Verizon, so we tried moving over there. Still no go on leveling, so we moved a few feet over (pictured above) and had no problem leveling. But now we only had 1 bar of Verizon and it would go back and forth between 3G and extended.

Well, that’s why we look for places on Saturday, so if it doesn’t work out we have all day Sunday to find something that does.

Dinner Last Night:
Pasta with Chickpeas and Garlic Sauce with steamed broccoli rabe. I’ve been making this since we were in our first Airstream in 2005 or 2006. It’s the only recipe on my menu this week that we’ve had before and since I wasn’t feeling that great I figured it would be the easiest. I only use the 2 cloves of garlic in the beginning of the recipe and omit the two at the end. Don’t forget the lemon at the end, for some reason it’s forgettable when you’re assembling it and it’s a key flavor. 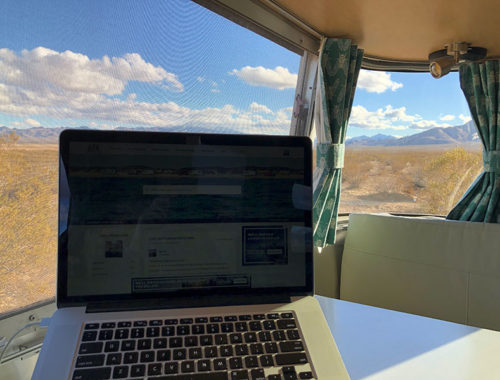