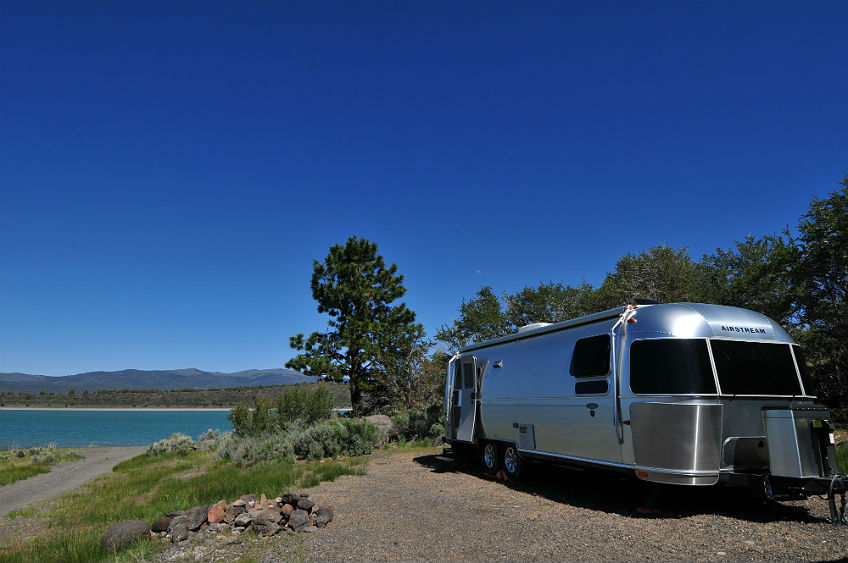 The Rocky Point campground at Eagle Lake in California, might be one of the most beautiful boondocking spots we’ve stayed at.

Saturday, when we first arrived we didn’t go too far down the road, even after unhitching, because it seemed a little too bumpy and we had read there wasn’t anywhere to turn around.

The following morning, two Airstreams pulled up in front of us. They had been parked farther down the peninsula. Apparently there was a mini-rally going on and there were 3 other Airstreams down at the tip.

The other 2 were leaving as well, but one was going to stay. So after breakfast we drove down the road (stopping for a geocache on the way) and at the end found a huge camping area with fire pits and an outhouse.

Since it was our anniversary we weren’t really interested in camping near other people, though off to the side we found this campsite that brought our cell service from 3 bars to 5, was also more isolated and more beautiful than our original spot. So we packed up and moved.

It was delicious. Meanwhile, I’m reading the Vegan Fireman’s My Beef with Meat

book after seeing him on CBS this morning. I’m a total cheese junky and he’s got me thinking.