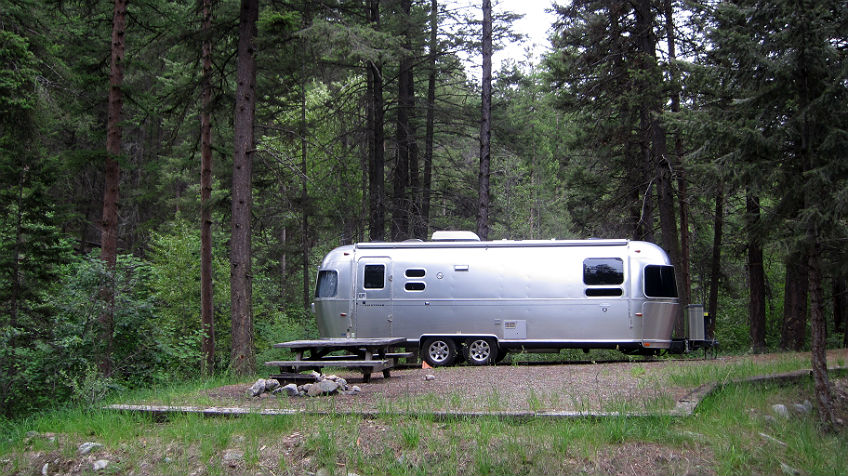 We have to leave every two weeks in order to dump our black tank, so we figure, since we’re going through the effort to put things away and hitch up, we might as well make an overnight or two out of it.

So Friday night we went looking for Chopaka Lake. On google images, it looked like a great boondocking spot. It’s an hour drive west of Tonasket. About 20 minutes from the lake, the google maps lady told us to turn right onto a dead end road, so I try looking for alternative routes and our data connection was lost entirely because we didn’t have cell coverage.

So we continued straight and ended up at the base of a very steep gravel road where the first lady I asked said she wasn’t from the area, but she had just walked past a sign that said Chopaka Grade.

Then a car approached and I asked them if that steep road would get us to Chopaka Lake. They said yes, but they didn’t recommend we go with the trailer. They said they had a smaller Airstream and they wouldn’t take it up that road, the lady said it would make her very nervous. They were able to recommend a boondocking spot about 5 miles down the road called Toats Coulee Camp.

Toats Coulee Camp has about 6 free campsites with picnic tables along a very loud rushing river.

The next morning we drove up Chopka Grade. We could have made the climb with the trailer but I’m glad we didn’t. The lake was jam packed with fishermen (and their trailers). I think we ended up in the better campground for us at Toats Coulee.

Dinner Last Night:
Friday night we had this corn chowder recipe. The potatoes took a LOT longer than the recipe suggested. It was pretty good. Brian liked it more than me, but then he doused his with sriracha.